searching for the plot

Another non-post. Sorry, sorry, sorry! Big work project. Must keep my nose to the grind stone!

I just had to pass along this gem:

If you’re going zuh? I will refer you to this side by side of Mad Men season 3 episode 4 “The Arrangements” when Sterling Cooper makes a Pepsi Patio commercial based off the Ann Margaret rendition.

And so it was!

Apparently, Jon Hamm is the new voice of Mercedes-Benz. Their logic being that Hamm is both extremely popular from Mad Men and his recurring role on 30 Rock, NBC’s Tina Fey vehicle, and because he has a “terrific, very resonant voice with a lot of gravitas to it.”

It’s true that Hamm’s a mega hunk with buckets of talent. I’m glad he’s getting the attention he deserves. I’m just not positive that the commercials are going to have the exact effect Mercedes-Benz is going for.

Sure, talking points about eco-conscious engineering drip like glistening ambrosia from Hamm’s well-molded lips, but all I hear is Don Draper pulling another one over on us, “it’s toasted” style.

Back? Okay. This is the first episode of Mad Men. How could I not be hooked? For those of you who haven’t jumped on the bandwagon yet, I really do urge you to give it a shot. The sets, costuming, hair, and makeup are outdone only by the superb writing and acting.

The down side to watching Mad Men? Well, you start to feel like EVERYTHING is toasted.

Like Don says, advertising is all about telling the story that affirms the consumer. If an ad can do this well, it generally leads to consumption of the advertised product.

More often than not, the story that we’re being told about one product, is actually just as true for the competition. It’s simply that one company has been more successful in branding.

Sometimes the story being told is true but irrelevant. Like “natural botanicals” in shampoo. Sure they’re in there, but they may be included in such tiny amounts they have no effect whatsoever on your hair. The active ingredients are probably a mix of unappealing things like detergents, preservatives, fragrance, and dye. But, hey, slap in some technically present “tropical essence” and your customer feels like they’re washing their hair with shampoo made from fairy lights and tropical fruit. Don’t even get me started on “chemical free” products. Uh…what is your product made of then? Dark matter?

Think the Lucky Strike ruse is old news? The rebranding is eerily similar to this company’s attempt to change the name of prunes (image: old people with constipation) to dried plums (image: hip foodie in search of exotic delicacies). The product is the same, the words and the story we tell ourselves has radically changed.

As you know, I love stories. I even like to be told stories about a product that someone wants to sell me. Heck, I even tell myself stories about the products I’m buying sometimes. I hunted down the exact brand and shade of red lipstick used on Joan in Mad Men. Why? Because we’re both fair, I love lipstick, and when I wear it I can tell myself that I am a capable and feisty professional woman like Joan.

I use my Imaginary Heroine powers and try to tell myself a story to make me feel differently, act differently. Sometimes it doesn’t work. But other times it does. That little bit of lipstick makes feel just a touch more ready for Monday. 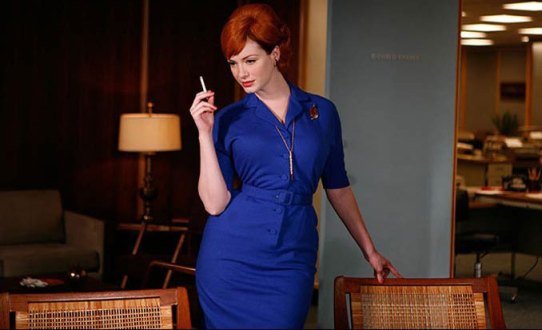 As immersed as we are in media culture, we need to be hyper-aware that the story we’re told by advertisers (as well as politicians, professors, journalists, novelists, etc) is by no means complete. Mostly because no human is omnipotent or infallible, but also because some humans seek to manipulate others. Sometimes for innocuous reasons and other times for malicious reasons, but almost always for reasons that benefit the teller and not the listener. Not to go all Professor Moody (who had his own agenda, especially whilst being impersonated a murderous Death Eater*), but we need to have constant vigilance on this issue.

Take for instance, the commercial blitz for the 2010 Census. That joyful man in his bathrobe is “being counted!” and in doing so he’s funding after school sports, fixing roads, and saving pregnant ladies in labor.

However, that story ignores some of the more ugly uses of the Census in the past. Like rounding up Japanese Americans for internment in the 1940s or giving information on the concentrations of Arab Americans to the Department of Homeland Security in 2002 and 2003. Not to mention the more recent identity theft that resulted from the Census Bureau misplacing 672 laptops as well as Census workers posting respondents’ data on a public website while testing software. These aren’t fairy tales of civic duty, they’re nightmares of government excesses and ineptitude.

And if you’re thinking of using the above reasons to skip the Census, forget about it. You’re required by law to take part if you’re over 18. The Census Bureau is able to levy fines of $100 per blank answer, $500 per willful wrong answer, and $5,000 for non-compliance. So, fill out your form and hope that Bathrobe Bob is right this time around, okay? If that leaves a bitter taste in your mouth, follow-up mailing your letter with a screening of O Brother Where Art Thou and cheer when Little Hogwallop says “I nicked the Census man” and Delmar responds “Now there’s a good boy.”

Because if we don’t, we’re all going to end up toasted.

*Ever notice how we all seem to attribute thoughts and actions to Professor Moody that were expressed NOT by Moody, but instead by Barty Crouch, Jr.? Even Ron, Hermione, and Harry, who would have reason to know better, continue to quote Crouch-Moody and take his advice. Weird. I don’t know if this is JKR’s subtle comment on how much people resist the notion of betrayal or if she did such a good job with Crouch-Moody that he hoodwinked not only the Potterverse, but also its fans and author!

The nominees for 21st annual GLAAD Awards were announced a few weeks back and AMC’s Mad Men is up for best drama series. Pre-Season 3 Finale, I would have been using this as just more proof of how smart and sexy and awesome this show really is, but now I’m not so sure.

If you haven’t heard of Mad Men yet, it’s your own darn fault. Set in the 1960s, the series revolves around Don Draper, an advertising executive for the big Madison Avenue firm, Sterling Cooper. The set design and wardrobe are gorgeous. The ensemble cast is dense with high-wattage talent. The story lines turn the heroes into villains and back again and weave through plot lines that make you think about racism, consumerism, feminism – all those big, heavy -isms – and makes it a blast.

One of the most beautifully constructed characters is that of Salvatore Romano, played by actor/designer Bryan Batt. As Sterling Cooper’s Art Director, Sal proved himself to be both capable and passionate about his work, which is probably why Sal’s Italian heritage doesn’t seem to be a major issue to the big wigs – he is very good at what he does. Something that would be a big deal to the Powers that Be at Sterling Cooper is that Sal is also a closeted homosexual.

The character is used throughout the show to illustrate the difficulty of leading an alternative lifestyle in post-Korean War, white picket fence America. This is to say, Sal isn’t allowed to lead an alternative lifestyle without destroying his career and social life. Instead he is forced to live a double life, marrying a wife he cares for, but isn’t physically attracted to and playing along with the WASPy Madison Avenue career men.

Sal does have a few romantic story lines. He is propositioned by a client, but turns him down. Later he develops a crush on a coworker. His first real romantic rendezvous is an interrupted make out session with a bell boy. Sadly, nothing really comes to fruition. He is paralyzed by the social climate, unable to create a romantic bond let alone build a functional relationship.

Sal is more the rule than the exception, because on Mad Men everyone is living a lie. Don, Pete, and Roger, also live double lives, playing the married family man, but always searching for a new thrill. Just like no woman can ever look like the pictures in magazines (even the actual women pictured!), no one can lead the life the Mad Men have carefully construct and sold in their advertisements.

Roger and Don’s infidelities are widely known and only served to enhance their reputation. Sal, on the other hand is utterly destroyed not by following his heart or giving in to lust, but because he turned down the aggressive advances of Lee Garner, Jr., heir to the Lucky Strike Cigarettes empire.

Lee Jr. decides to exact revenge and demands Sal be fired. Don obliges, ostensibly in order to save the account and protect the company.

It made complete sense. The Lucky Strike account was huge and losing it could ruin the firm. Don is not in the business of social causes. It’s this same tough-nosed pragmatism that allowed him to promote Peggy. Hiring a skillful woman copy writer would help the firm; firing a gay art director who offended a client would help the firm.

I’m sure you could argue that if Sal had not been a homosexual, Don might have backed him up, but I’m not sure that’s true. Don was pretty hardhearted about an array of personal issues displayed by numerous characters when they got in the way of his work.

When Sal didn’t reappear for a few episodes, I was bummed, but not too worried. Then the Season 3 Finale rolled around and the big hitters of Sterling Cooper peeled away into their own new company: Sterling Cooper Draper Pryce. Our beloved Joan waltzed through the door after what felt like an age of exile. I thought that maybe, just maybe, Sal would be next.

Even after it was brought to my attention that fledgling SCDP hinged on Lucky Strike, I was sure they would find some other way for Sal to come back. Maybe he wouldn’t work for SCDP. Maybe he would be rehired at the old firm. Maybe he would start up that art-driven ad agency he talked about in an earlier season and compete with SCDP for clients.

It was not to be. Filming for Season 4 begins in March and Bryan Batt will not be on that set. And I am heartbroken all over again for Sal, who was not only shamed and punished for being the victim of sexual harassment, but is then required by our modern writers and producers to vanish into the night without a peep.

This brings me back to the GLAAD awards. These are meant to “recognize and honor media for their fair, accurate and inclusive representations of the lesbian, gay, bisexual and transgender community and the issues that affect their lives”. I would have been rooting Mad Men for the win…Until now.

Sure the writers deserve recognition for giving us a gay character that hasn’t internalized homophobic rhetoric that all gays are sex fiends or have no character attributes beyond their orientation and fab fashion sense. Sal isn’t feminized, flamboyant, or flighty. He is a guy with dreams and thoughts and motivations that hinge on life issues including, but also beyond, his sexual orientation.

And they dumped him!

I’ll freely admit that Sal could never have a happy ending. He’s a gay man in the 60’s, after all, and Mad Men is not in the business of happy endings. One might say that’s kind of the point. Happy endings are sold to us like Lucky Strike cigarettes – they’re toasted…with a side of lung cancer.

But can GLAAD really reward Mad Men after they let Sal drift into oblivion? I wouldn’t.